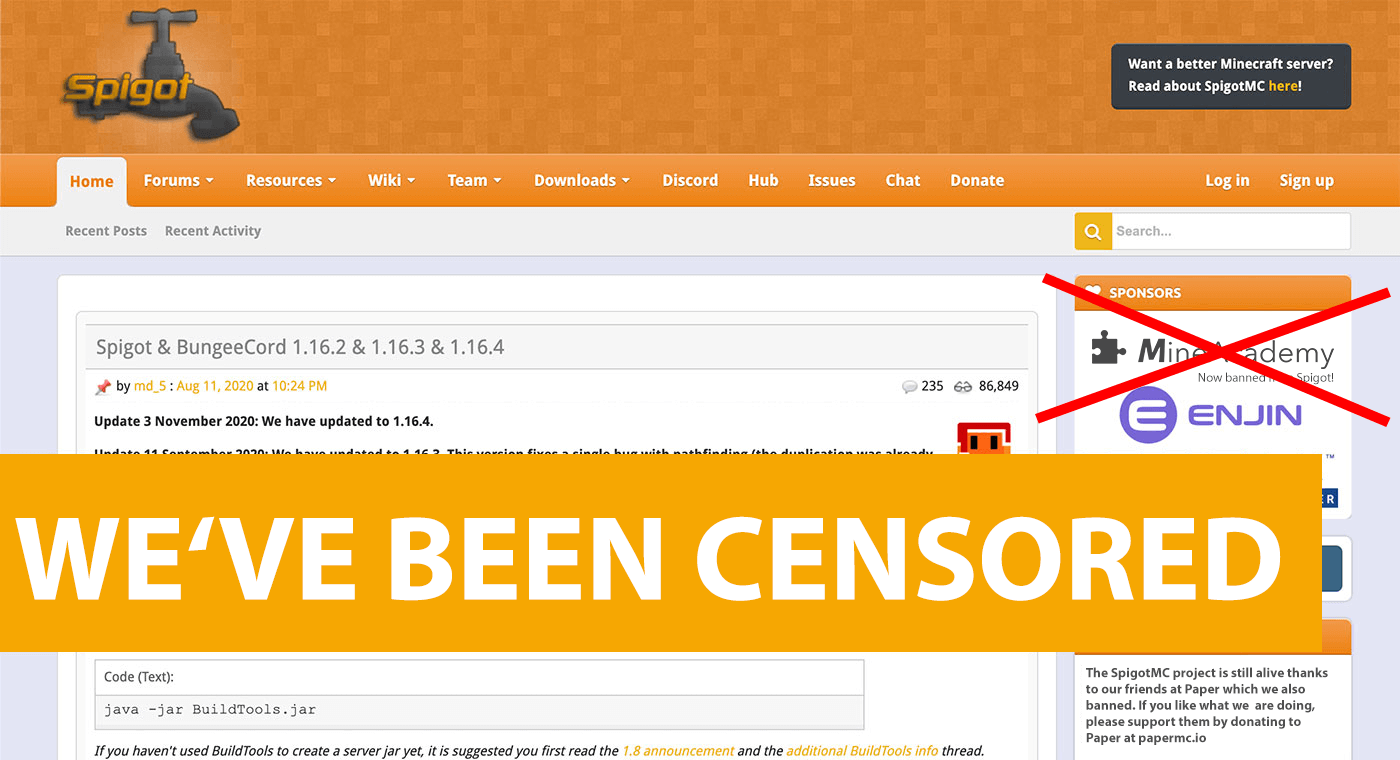 The Death Of SpigotMC

2021 Update: This is our most read article we’ve ever written. I acknowledge some facts I did not check and I am thankful for the community for correcting me, so I edited out the relevant parts.

We live in a strange world, a world that proclaims democracy, but won’t tolerate diverse opinions. Censorship is silently occuring and deplatforming became popular in 2020. A world that is oddly focused on drama, and yet I’d hate to contribute, I have to share that got banned and blacklisted from Spigot.

I feel strongly about my last 8 years on Spigot. We’ve got over 700,000 downloads are helped tremendeous people with their server or simply become a better, more skilled person to pursure their future goals.

But not everyone is fond of that vision.

I respect the work of Michael Dardis, the founder of SpigotMC from Melbourne, Australia, going by the nickname of md_5, and other collaborators. We’re simply frustrated with the long-term state of how things are and the lack of transparency and communication, so I decided to talk about them in public. It is purely meant to be learned from, just like I learned from the criticism of MineAcademy.

I woke up yesterday, and trying to login into Spigot, I found that my account has been banned. The stated reason was “advertising”. That happened 24 hours after we left the side and moved to MC-Market.

SpigotMC used to be one of the most popular forums for Minecraft server owners and people passionate about the game. I’ve opened my account in 2013 and was a happy user for many years. It used to be a great and a friendly community.

Your Efforts Are Irrelevant & False Entitlement

We’ve spent 12 months developing a brand new software that’s solving a painful problem: it helps filter and format chat on a Minecraft server. We already had a 6-year old similar plugin on the forum, which was outdated we wished to replace it for a fair 9 Euro upgrade price to existing members.

“Your efforts are irrelevant. Even if you’ve put 10,000 hours into the program, lol at you and we’re entitled to control the platform as we wish.”

And here’s a personal message from Michael Dardis, md_5, to all of you and all the other developers who have their plugins on Spigot. It goes along the lines of “I’m a superior and you’re a peasant, I’m not going to deal with your garbage.”

This is a public insult to the entire Minecraft community and the thousands of developers spending hundreds of thousands of hours coding their plugins. Please re-read this and make up your own opinion.

SpigotMC’s support team and the head of Spigot, Michael Dardis, md_5,  have alienated and humiliated many, whom few were able to raise their voices in fear of getting their accounts banned and unable to continue with their passions.

This behavior is inappropriate to say the least. There are minors on their platform, which are faced with cyberbulling, attacks and adult drama. I had inappropriate moderators myself, and within 3 months we took action. They’ve been running for 8 years now. Let’s prove this.

“The spirit of envy can destroy; it can never build.” -Margaret Thatcher

Here’s the hidden reason why developers are getting banned and why SpigotMC and their staff acts so hostile towards people who want to have their plugin on their platform:

The main premise they bring up is that little donations have been raised and they’ve been serving us for free, so we shouldn’t be entitled for anything.

The truth is, there’s little actual incentives to donate to the forums (as always, I may be wrong but that’s my opinion). When I have to deal with their obtrusive rules, lacking customer service and arrogance on a weekly basis, I feel turned off to donate.

In 8 years of running they’ve failed to setup a proper donation system with incentives that actually motivate and reward people for donation. No, they blame us instead. And now, the envy has built up and their resentment has grown to every place of the forums.

We can’t make this argument publicly on SpigotMC. People are afraid of getting their account shut, many of which already did.

They Kept Changing Rules To Kick Us Out

Since 2017 they kept making rules more obfuscated and hostile. They started censoring what you could say or not say on your Overview page, then it extended to censoring your Resource Update log and in summer 2020 they banned plugin authors from protecting their resources from thief and copying – they banned obfuscation.

I firmly believe that their lack of proper customer support has resulted in developers PayPals accounts getting banned, and could have prevented many scams on the platform.

Their stance is clear — they are doing you a “favor” by simply existing. You are not entitled to anything, and “there is nothing” they can do.

There are multiple issues with the rules and support as we see it:

We Have Premium Resource But Actually Hate It

Spigot allows plugin authors to sell their resource. However the entire stance of their team is against this.

You will get no support, and will have to deal with broken stuff on your own.

In 2020, the USD value has plummeted, and numerous authors making a significant income from SpigotMC simply asked to have the price cap increased. Denied. Numerous authors submitted their plugins they’ve spent 1,000s of hours on, only to find these were rejected for a ridiculous reason. Envy?

Which brings me to the question — why on Earth did they continue to have the Premium Resources section if they’ve clearly seen it is not developing in the direction they wanted it (which was unrealistic anyways)?

They offer you the option of selling your plugins, but behind closed doors, they actually resent it.

Why I Discontinued Some Of My Plugins

I did not want to stop publishing plugins, I was disgusted by what’s going on on the biggest Minecraft community space so I decided to put my efforts elsewhere. I was blown away by the number of people who’ve reached out personally to give support and help.

Right now, we won’t discontinue and remove ANY plugins. Our plugins got moved into InactiveResource due to the account being suspended, not because they were actually removed.

More information including links on how to get your plugins is available here.

So Here’s What I’m Going To Do

This is not a promotional post for MineAcademy. I’m not going to say “MineAcademy will save you all — sign up here for a 25% OFF”. I wrote this blog post to raise awareness of the rapidly worsening situation on one of the most popular SpigotMC forums.

We are however, prepared to build a better ecosystem for everyone wishing to have a great community during these times. That’s everything I want to share about this right now. Stay tuned.

We developers and everyone who enjoys Minecraft during these difficult times, need a new home.

A place that’s without ads, political drivel or non-sensational rules. A place where you can hire a developer without risking your money and getting scammed.

A place where you can sell your plugins without getting your PayPal banned.

A place where fake and defamatory reviews are removed and all authors treated equally.

A new home with an actual customer support that doesn’t “hate you” and cares about and appreciates your efforts.

PS: Support this idea by showing your interest here. If enough people do, we’ll start developing it shortly. THERE IS NOTHING TO SELL — I HAVE NOTHING TO SELL HERE I AM JUST ASKING if you are interested in this idea or not.

Notice: Comments are now enabled. I encourage free speech and an open, constructive dialog. Thousands of people will be reading this article so make sure you let them know your thoughts below!

Edit: People requested adding things, you can add me as a friend on Discord: kangarko#4233 or email matej at mineacademy.org. I also changed the featured image, previously we had a joke fake ban reason, and even thought it was mentioned in the text, some people missed it.

Edit: Reaction To Their Official Statement

Just wanted to clarify some of the things that came up in the official response to this blog post.

It is mentioned that the thumbnail with the fake joke reason was fabricated and this was never mentioned in the post. The first is true – I jokingly misspelled their name and copied their replies and pasted it to the reason as a satire. This was mentioned in the post, however they seemd to misguide readers on purpose instead of considering what we had to say. The second claim is completely false. Had I wished to have used archive.org when first publishing to prevent this.

Notice how the attention is withdrawn from the context of this article itself but pointed out to a potentially disputed thumbnail in an attempt to discredit it.

Also there’s mentioned that I made alternative accounts on this site. That is true, Michael Dardis, md_5, explicitly allowed me to create a “kangarkodemo” account back in 2019 for testing purposes (“as long as it stays for that purpose” he said, with an arrogant tone). You can verify when the account was made yourself. There’s no other account created as I have no desire continuing working on SpigotMC. Claim that I made new accounts post-ban is false.

At least they’ve finally addressed one email that I’ve sent to them, unfortunately did not realize the inexorable fate was meant for them. Hey, why not address the other dozens of emails I, and many others, sent since 2013 that were left in the trash?

“It is deeply saddening for us.” they’ve mentioned. No it isn’t. You ban people right before Christmas and go on rejecting resources for months on end and not even bother fact-checking before writing an emotionally driven article. You call other peoples’ work “irrelevant” (proof above) and then vehemently argue with your own work’s importance when it’s relevant for you.

Instead of censoring information (like Spigot does and announced in the blog post they will continue do), we’re leaving doors open and using a third party comments system for people to express themselves. We’re also considering opening our Discord for public and creating our own forums.

In the last 8 years, SpigotMC has failed to provide a tutorial on using their own software that’s complete, simple, up-to-date, structured and with personal customer support. Instead, they’d call people idiots and wonder why little donations have been raised. We built our classes out of the need to help people understand their software. “First they ignore you, then they laugh at you, then they fight you, then you win,” said Mahatma Gandhi and after we’ve been blocked on their site, we’ve entered the last and the forth stage.

PS: If you pay close attention, you’ll notice that there’s zero actual response to the context of this blog post.

SpigotMC has banned us after 8 years for advertising tutorials on using their own software for which there’s no official tutorial to date. We politely disagree and felt the need to talk about the unfair policies, cyberbulling, the toxic treatment and can no longer recommend their platform to anyone.

We are moving our resources to MC-Market and in the meanwhile developing our own, unique solution.