GET IT NOW!
Scroll below for upgrade options.

ChatControl Red helps you to format and filter your chat. It works on Minecraft 1.2.5 to the latest and supports BungeeCord, Discord and MySQL.

You install ChatControl Red on a Spigot or Paper server, and optionally install BungeeControl on BungeeCord.

Making your server unique is time consuming. It's frustrating how doing basic things is often impossible without installing 25+ plugins.

If you have purchased ChatControl Pro™ on SpigotMC or made a contribution (translated the plugin, contributed on GitHub or through other means) you can obtain free lifetime license to ChatControl Red™.

Yes, even if you purchased ChatControl Pro on 2015, you can get a free upgrade right now.

PS: For changelog from ChatControl Pro, please see this link.

Fill the form below to apply for our free update offer:

ChatControl series are rated #1 in chat filtering and chat management. ChatControl Red™ is a full rewrite bringing the following over the ChatControl Pro from 2015: 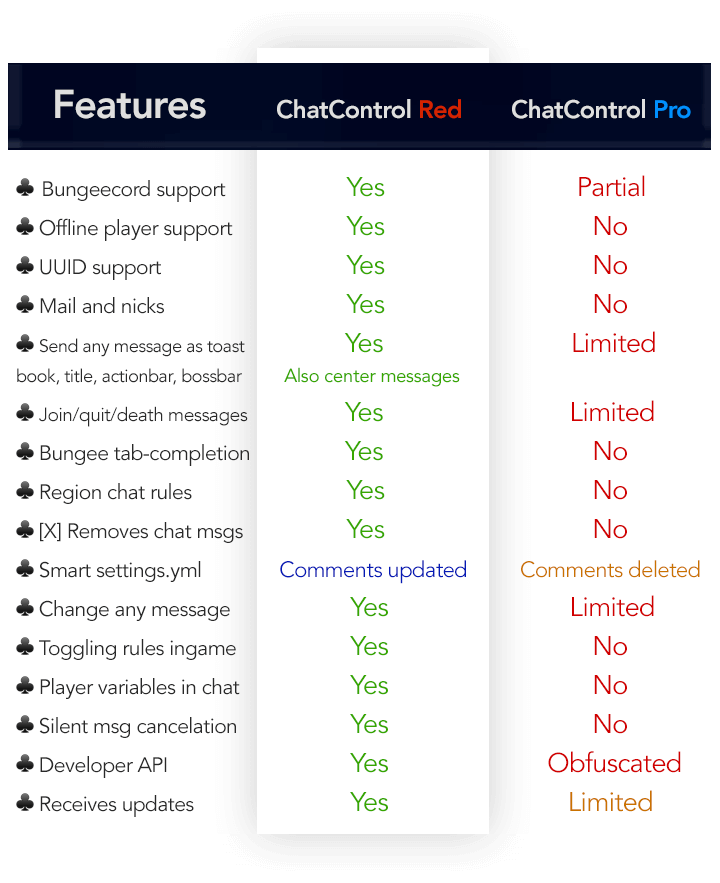 Build an amazing community. Your server, your way.

Why do I have to repurchase ChatControl Red™ again?

Can I hide that I'm running ChatControl Red™ on my server?

Yes! I understand how frustrating it is to have a hardcoded advertisement right on your server. That’s why ChatControl Red™ makes it easy to change over 900 messages, including those shown on /chatcontrol or /channel commands.

You can even change the layout and design completely to fit your server’s unique needs.

Since 2015 when the ChatControl Pro™ was available as premium, the entire core has been rewritten in Red to optimize performance and stability to its maximum potential.

It is written according to my latest knowledge and coding standards, based on thousands of customers questions, complaints and ideas.

We’ve added 100s of new features such as full-featured MySQL and BungeeCord support, deleting chat messages, [item] placeholder in chat and so much more that ChatControl Red™ is now officially the most advanced chat management plugin ever written!

See this link for more information and a changelog.

Will you stop updating and remove ChatControl Pro™?

No. It’s infuriating to have your server bricked because a critical plugin you’ve spent years on configuring has disappeared or broke on a new Minecraft release.

That’s why ChatControl Pro™ is now on maintenance. That means, I ensure it is stable and works fine on future Minecraft versions such as 1.17 or 1.18. I’ll also continue to fix major bugs when they are discovered. However, I won’t add any new features or make code changes unless those are critical bug fixes and won’t answer general support questions due to lack of time. ChatControl Pro will be made open source so everyone can review it and make changes as they like.

If you have doubts, please see the good old ChatControl Free from 2013 that’s been on maintenance for the last 7 years. It still works fine and receives updates as needed.

If you don’t want to update, don’t. You can enjoy ChatControl Free or ChatControl Pro for years to come. I believe that’s totally fair. I’m not a large corporation forcing you to upgrade. However, I am a one-man team and would greatly appreciate the few cups of coffee you could invest into thousands of hours of work by upgrading. That’s it!

Do you offer refunds if I don't like the plugin?

Absolutely, we’ve extended our refund policy from 14 to 30 days because we’re so confident in the quality and craftsmanship of ChatControl Red™.

If for any reason, you’re not satisfied with our product, you owe us absolutely nothing. Simply contact [email protected] within 30 days of your purchase and we’ll send you money back. Please note you won’t be able to repurchase again.